Ancient Warfare, an English-language publication from the Netherlands, is a true gem.  The magazine is full of scholarly articles on ancient military topics, which you will bet I love.  The latest issue’s focus is on the Dacian wars of Emperor Trajan.  These efforts deserve to be better known.  Unfortunately, we lack a good literary source from ancient times that deals specifically with them.  There must have been histories of this kind made, but they have been lost to posterity.

Fortunately, we have one of the best archaeological sources of all – the famed Trajan’s Column – which still stands in Rome.  It depicts the entire Roman army of the first years of the second century A.D. on campaign against the Dacians.  Much of what we know of the appearance of Roman soldiers of the early Empire derives from this monument.

There are top-notch people behind Ancient Warfare.  They also put together fantastic podcasts which you should immediately download from iTunes.  All of them!  I wish that we could have an American version of this journal.  Lucky for us that the magazine is available at Barnes & Noble.

Take a look at the dude below.  Awesome, right?  This is what a legionary – really! – derived from the Adamklissi monument in Romania – looked like.  Very different from what you expected, I’ll bet.  He was likely serving with a legion stationed in the east of the Empire, and fought in Dacia with Trajan.  He has already acquired something of a “Byzantine” appearance.  His spangenhelm helmet was based upon Iranian models.  Great job by the author, Raffaele D’Amato, and the artist, Johnny Shumate! 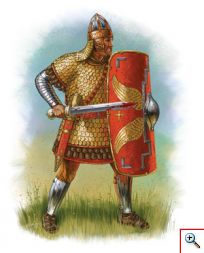