At long last, someone has addressed the urgent question of naval warfare in space! I am not joking when I say this. Check out this article. I am a fan of science fiction, especially naval science fiction such as the Honor Harrington series by David Weber. Most SF novels use a known historical analogue of water naval combat as the basis for how they depict space-based warfare. Typically, this involves super-humongous ships engaged in battle over thousands of kilometers behaving as if they were duking it out at some far future Trafalgar. This analogy is dubious, on the grounds that modern water naval combat is itself far removed from Nelson’s day, or even from the Jutland battle of 1916. Read about the Battle of Midway for just how different things were in the 1940’s! The American and Japanese fleets never sighted each other. Damage was inflicted, almost totally, by aircraft-delivered weapons.

The nature of space battles of the future can’t truly be predicted, because we don’t know what kinds of weaponry will exist or what it will do. My money is on missiles, because they can change direction to strike at targets after they have been fired. Presumably, a laser or plasma gun will only be able to fire in a single direction. If an enemy vessel is far enough away, it will likely evade. So direct fire weapons will probably only be useful at comparatively shorter ranges, unlike a missile.

The major trend of almost all weapons since the invention of gunpowder firearms several hundred years ago is for higher lethality at greater range. Even lower lethality at greater range is still a good bet because it allows the firer to stay outside the range of an opponent’s weapons. Therefore, I think that the longest range weapons that provide the best chance of hitting the target will be the primary weaponry deployed on a spacegoing warship. I don’t envision battleships like the Yamato (yeah, Starblazers!) or the Galactica. No Star Destroyers either. For that matter, I don’t foresee even the USS Enterprise. Instead, I think most space warships will be akin to missile boats or corvettes of some kind or another – fast, inexpensive, and relatively small.

For a much more near-future examination of the potential for war in space, more science fact than science fiction, read this Time magazine piece.

Very few ships at sea are as impressive as an aircraft carrier. The battleships of a bygone era – USS Missouri, HMS Warspite, or Bismarck, were extraordinary vessels, but they are now vanished from the world’s oceans. Carriers also grant the navy that employs them an extraordinary ability to strike at targets well inland and out of the range of even the largest guns. To put this in perspective, the most powerful naval guns emplaced upon a battleship could strike at targets some 26,000 yards away. A carrier plane can fly to ranges over a thousand miles – more if it is refueled in the air. This is called power projection.

But a carrier is arguably the most difficult of all warships to operate. It is both a ship and an airport squeezed into a hull that, no matter how large, is going to be very cramped. Landing on a carrier requires the finest pilots and highly skilled deck crewmen. Further, even conventionally-powered carriers will have prodigious fuel needs, and nuclear carriers, while not dependent on fossil fuels, will demand expensively-trained nuclear technicians to keep their reactors running.

China has just now, with the launching of the Liaoning, entered into the exclusive club of navies that operate genuine carriers – ships that can launch and recover fixed-wing aircraft, not just helicopters. The Chinese are taking things slowly. They purchased the unfinished hull of the Varyag, a Soviet-era vessel that was marooned in the newly-independent Ukraine when the USSR collapsed. It took a long time for China then to complete the ship, a sign of both the aircraft carrier’s complexity, which is true of all carriers, as well as the need to develop the requisite technical base to fabricate the parts to make the ship more than a floating hulk.

It is interesting that China is getting into the carrier game now. While China’s maritime ambitions are nothing new, it does not appear that seagoing airpower is necessary for it to achieve its goals in the waters nearest to it, especially in the East and South China Seas. The Chinese seem to realize that the Liaoning is a learning vessel, and that it will be a while before it is truly ready for sustained combat operations.

The U.S. Navy, which is the current master of such things, did not leap into carrier warfare all at once either. The ability of U.S. carrier strike groups to operate for long periods far from base was developed during the crucible of its Second World War battles with the Imperial Japanese Navy. Getting airplanes off the deck is no small feat. Coordinating their attacks, and mastering the time and space dimensions of carrier warfare, which are so different from that of old-fashioned, gun-equipped warships which can see their targets when they fire, was not something that came naturally to the Americans. At both Midway and Santa Cruz, the U.S. naval aviators had trouble synchronizing their attacks on the Japanese.

Since the end of the war, the U.S. has retained its carriers to enhance its overseas diplomatic and military efforts. Is that what China is looking to do with its own carrier, or carriers, one day? Perhaps China feels that the only way to safeguard its interests in the Middle East and Africa is to have the ability to deploy military aircraft at sea. But Chinese carriers would be vulnerable to the same antiship missiles and other weapons that make the survivability of American carriers during a “hot” war so dubious. Carriers will be the first targets in any shooting war. China itself has deployed long range antiship ballistic missiles to strike at U.S. carriers. The Liaoning will face very similar threats when it is at sea. Apparently, China is willing to run that risk, that is, deploying a costly warship that will be the biggest target in its fleet, for the benefit of the diplomatic and power projection capability that it provides.

Without doubt, the introduction of the Liaoning will probably cause more psychological distress among China’s neighbors than it will actually affect the balance of power there. The Liaoning is not so much a game changer in itself, but a harbinger, most likely, of things to come. A carrier is not a half-measure when it comes to things naval. It is too big, complex, and costly to be just a showpiece. Barring some complete reassessment of its strategic posture, China’s navy will likely deploy other carriers in the future, to enable it to influence affairs far from Chinese shores.

Among other ominous developments, here is an article about the current situation in East Asia.  According to the author, for many of the people of China and Japan, the Second World War never really ended.   The resolution has been just been delayed a while.

These fantastic warbirds made an appearance at the American Airpower Museum in Farmingdale, New York, over the Labor Day weekend: 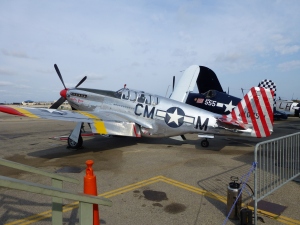 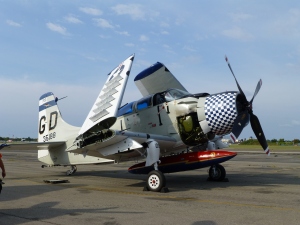 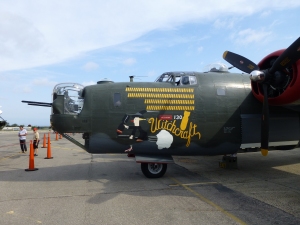 The Consolidated  B24 Liberator heavy bomber.

The Vought F4U Corsair – carrier fighter of the Pacific war.

When I first began posting  earlier this year about the naval rivalry in East Asia, I judged that the “cold war” stand-off would continue indefinitely.  All countries in the region, especially China, have too much to lose if the dispute should ever turn hot.  Peace is much better than war for an economy.  But recent events centering on the Diaoyu/Senkaku Islands have me worried that the already tense situation could spiral out of control if the feuding nations do not step back from the brink.  All parties involved should read Barbara Tuchman’s The Guns of August.   The danger of a catastrophic miscalculation is too great.  Read about the latest flare-up here.

Additionally, James R. Holmes, flat-out the best naval writer on the web, has written a great analysis of the possible match-up of Japan and China in a naval war.

Long-time readers of this site will recall a number of posts concerning China’s maritime rivalries with other Asian nations over territorial rights in the East and South China Seas.   As I noted in the post, Asia’s Mediterranean, the waters of “coastal” East Asia resemble the Mediterranean Sea of ancient and medieval times in the sheer multiplicity of contending states with overlapping claims.

There are rivalries that exist quite apart from China’s own ambitions.  Japan and South Korea – both U.S. allies – also have a dispute over the Takeshima, or Dokdo Islands.  You can brush up on the dispute, which has just been inflamed by the visit of South Korean President Lee Myung-bak to the islands, here.

Read this illuminating article about American airpower over Afghanistan.  Don’t forget to watch the extraordinary three-and-a-half minute video either.   It is remarkable from start to finish.  The piece makes some good points about the recession of airpower in the theater as U.S. forces draw down.  Airpower is much like oxygen.  You don’t notice it much until its gone.

Another point to bear in mind – one hour’s operation of a U.S. Navy F/A-18 Hornet fighter can cost as much as $20,000.00.  Very roughly, that is equivalent to dumping a Honda Civic into the ocean for every hour of flight time.

I recently visited the fabulous Cradle of Aviation Air & Space Museum in Garden City, New York.  Apart from being a top notch aircraft museum, the Cradle places a strong emphasis on showcasing Long Island’s rich aviation history.   Here are photographs of a few of my favorite exhibits: 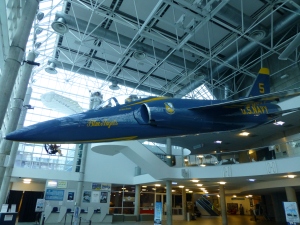 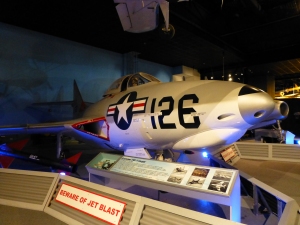 This is a Grumman F9F Cougar with swept wings.  The incorporation of wartime German aerospace research allowed post-war American engineers to place redesigned wings on the originally straight-winged Cougar. 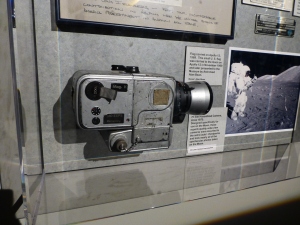 The 70 mm Hasselblad camera was used by Apollo astronauts to take pictures on the moon.

A Republic F84 Thunderjet.  It was no match for the MiG-15 in combat over Korea, but it performed well as a fighter-bomber.  Note the straight wings.  Swept wings were just becoming standard on new jet fighters at this time.

The tensions in the South China Sea are primarily about resources, but also about national pride.  Many claims are very old, and can’t be reconciled with other claims.  This article lays out five major sources of trouble.

The South and East China Seas are looking more and more like Asia’s version of the Mediterranean, with all of the same problems that have plagued the Middle Sea for centuries.  Multiple hostile states vying for control.  Just as the Mediterranean has been a theater of conflict going back to time of the Mycenaeans, the South and East China Seas are now arenas of tension for numerous Asian nations struggling for resource rights amid competing historical territorial claims.   Take a look at this article about the ongoing problems in Asian waters.

China is establishing a new garrison on Yongxing Island.  This is meant to help solidify Chinese claims to the Spratly, Paracel, and Macclesfield Bank Islands.

Further north, there is a potential feud brewing between China and Japan over Okinawa.

To help us understand China’s motivation, here is another great piece by Jim Holmes of the U.S. Naval War College.

Tensions exist even between China and India in the theater.