MHQ Magazine has been the nation’s foremost journal of scholarly military history for more than two decades.  Its authors are all professionally published, and typically are noted authorities on the topics about which they write.  MHQ has been available for years in a glossy, perfect-bound format, appearing four times a year.  It has always been known for its elegant layout and wonderful artwork, in addition to its top-notch writing.  Now it is available as a download for Amazon’s Kindle family, and I decided to take a look at how the magazine translates to the electronic e-reader format.

Happily, it looks great, especially on the Kindle Fire, which is full color, and so does not lose any of the rich, vibrant hues found in the print magazine.  Navigation is relatively simple – nothing electronic will be so easy as thumbing through a print edition of course, but if you have used an e-reader before, such as the Fire, an older version of the Kindle, or the Nook, for that matter, you will quickly pick up the tricks of moving through the electronic edition.

The articles are the same as those that you would find in the print journal, and have not been abridged in any way.  Each article averages between three and four thousand words, and can be comfortably read in about twenty minutes.  This is important, as I envision that most will read the magazine on their Kindles an article or feature at a time, perhaps while on the train to work, or over a lunch break, not cover to cover.

Features new to the magazine with this issue include Weapons Check, which is a look at an individual weapon of significance in military history.  I enjoyed this very much – an examination of the Danish “Viking” axe of around 950 A.D.  These were devastating weapons, and it is said, a wielder could fell a rider and his horse with one in a single blow.  That sounds pretty potent to me, but these big axes disappeared from European warfare, for the most part, by the end of the eleventh century.  In my previous reading the reason for this was never truly answered.  Was it simply fashion, or was it something more substantive?  The Normans came in for a big shock at the Battle of Hastings in 1066 when the Anglo-Danish huscarls of King Harold Godwinson showed up carrying these man-killers.  The author, Chris McNab, helpfully suggests that the introduction of longer swords, poleaxes, and halberds made the use of the axe inadvisable.  It simply lacked the reach to cope.

The old standby, Fighting Words, by Christine Ammer, which examines the development of military terminology, is also in the Kindle edition.  Did you know that “belfry” was originally a movable siege tower with a pivoting ramp at the top?  Later, it became the term for the church tower where bats hang out.  Also, a constable was a high-ranking official who held command of a castle, but when the title was switched to the civilian realm, it received a demotion, and a constable ranked below that of sheriff.  Today, it signifies a policeman in the United Kingdom. 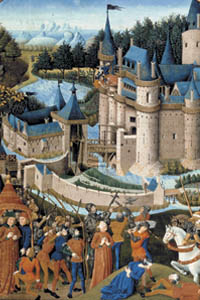 The cover article is “The 27-Day Secret War,” which relates the remarkable achievements of a handful of American special forces who guided precision airstrikes against Taliban targets in late-2001. The rapidity of the fall of the Taliban regime was stunning, and only throws into stark relief the difficulties that allied forces have encountered since then, now that the Taliban have regrouped. The photograph of the commando on the cover, “Cowboy,” true name and rank unknown, is almost worth the price of the issue.

“Payback” is Alistair Horne’s telling of the Doolittle Raid on Japan in April 1942. Seventy years have passed since eighty American airmen in sixteen B-25 bombers took off from the deck of the USS Hornet on a one-way mission. They lacked the fuel to return to the Hornet, and even if they had carried it, they could not have landed their big aircraft on its deck. The actual damage that they inflicted on Japan was minimal, but the psychological impact of their raid was enormous. The Japanese would overreach themselves in trying to plug the gap in their defenses through which the Hornet had slipped, and lose four aircraft carriers at the Battle of Midway less than two months later.

“The Fireball at Zonchio” is the story of a Venetian-Ottoman Turkish naval battle of 1499. One of the many things that I enjoy about MHQ is that I learn something new with every issue. At Zonchio, the Turks sailed with two large carracks – think a primitive version of one of Nelson’s ships-of-the-line.  It was armed with cannon, but also, in a nod to the Mediterranean’s fickle winds, could deploy oars for use when the wind failed. I had never read of these Turkish ships before, which must have stood out from the great mass of low-slung war galleys that were the mainstays of Mediterranean naval tactics.  As you probably have guessed, the fireball of Zonchio was caused by the detonation of the gunpowder stored aboard one of these vessels in a truly horrific explosion that, in the fifteenth century, truly was something new under the sun.

But the Venetians had little to cheer after Zonchio. The civic spirit that had made Venice a medieval maritime great power was not in evidence in the battle, and internal rivalries hampered the Venetian battle plan. They failed to capitalize on their initial successes, not least of which was the destruction of the Turkish carrack, and the Turks not only survived the battle, which might otherwise have proved a crushing Venetian victory, but went on to win the war.

Joseph E. Persico has contributed an opinion piece, “Did Roosevelt Doom Us to a Longer War?” in which he takes President Roosevelt to task for unnecessarily delaying the invasion of Europe. Persico makes some valid points, but I think that all second-guessing of Allied military strategy in the Second World War tends to overlook or undervalue the crucial role played by the Soviets in breaking the back of the German Wehrmacht. The German army of June 1944 was powerful, but it was nothing compared to the mighty force that could have, and would have, been deployed to France if the Western Allies had opted to land there in the summer of 1943. Instead, the panzer troops, as well as dozens of crack infantry divisions, were decimated in the brutal 1943 combat at Kursk and elsewhere that eventually saw the Germans thrown back all along the eastern front. About 80% of all German losses occurred in the East. That just about says it all.

MHQ for Kindle is available from Amazon’s Kindle Store by subscription for $2.99 a month, or $11.99 per single issue. The Kindle is a fine way to enjoy the magazine, possessing all of the advantages of portability found in an e-reader, without sacrificing the visual appeal of the print issue.  I recommend the Kindle Fire, on account of its color screen, but the electronic edition looked great on my older e-ink model too.